The Stigma of Seeking Mental Health Help and Treatment

When you are suffering from a mental illness, these are often the three most difficult words to say. But the real question is 'why?' 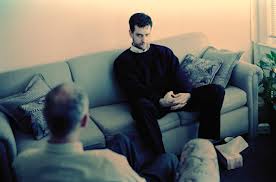 Asking for Help is Not Admitting to Being Weak

I believe the answer lays in stigma, but not the societal kind. After all, since doctor's and therapists appointments are confidential, why would you be worried about anyone finding out? Therefore, it must come down to a mistaken belief that we share that 'we must be able to handle this on our own and it is a signal of weakness to ask for help.'

When psychiatry gained popularity in the 1970's there was a great deal of stigma attached to seeing a therapist. People thought that those who went to therapy must be 'crazy' or 'a few screws loose.' But in the year 2013, people from all walks of life seek therapy. Some for relationship problems, some for addictions, some for social anxiety and some for depression. You wouldn't think of someone seeing a therapist for a relationship issue to be 'crazy' so why would anyone think you were 'crazy' for seeking help for a different malady?

My belief is, that they probably won't, unless you give them good enough reason to think so.

So much of this supposed stigma lies in our own thoughts and beliefs about the issue at hand. If you think you are weak for seeking therapy, then you are going to automatically think that others have the same view. If you think you are 'lesser than' for asking for help, then you will act in a way to make others think the same. It is a dangerous self-fulfilling prophecy.

I know in my life, people no longer stigmatized against me after I stopped allowing it to happen. Once I learned to confidently say that 'yes, I'm in therapy. It has changed my life. I would recommend it to anyone,' they quickly lose their stigmatizing steam. But if I acted ashamed of being in therapy, surely people would stigmatize against me.

If You Aren't Helping My Life, Then Why Are You Here?

Of course, there are always people who are going to be mean, no matter what you say. But then you need to ask yourself the question 'why are they even a part of my life?' If someone isn't helping your life, then they don't deserve a part in it.

Great points. While some of the stigma might be self inflicted, there is a real stigma in society and it's not until people are affected in their personal lives that they change their view. Great article.

Thanks for the information! good read

This article is really not helpfull for myself I have always seeked help till my recent stay in hospital which I was treated in an inhumane way. So that I can quite frankly say that stigma exits even amongst mental health professionals.

By me as clinical psychiatrist, the most responsible reason for stigma in mental health service is the insufficiency of psychiatrist to explain in understand manner the importance of mental health welfare or the consequences of mental disorder. It ought to make effort to spread and to promote in comprehensive way the essence of mental health in daily life functioning. Without mind we would functioning as robot and the life would be insensible and devastation one. On the other hand the intention of current psychiatric treatment of mental disorder is to recover the global life skills, which ones are always half-witted. Beside this, everyone have got any mental problem, but the criterion of mental disorder pertaining with respective index of life functioning. Mental health care system should improve this index without any exception. Therefore, it is imposed the necessity to extend the mental health service in community, as the best way to accomplish the benefit of mental health statement. In the same time, we would decrease the restriction from prejudices from mental pathology.

Great article. It really illustrates the need for those who are still ashamed to reach out and ask for help. By seeking mental health counseling you are better equipped to handle life and the stress that can often overwhelm you

Often the people who criticize you for being "crazy" are ill themselves without the courage to face their own shortcomings. I have had several traumatic events. Finally for me to go forward (not want to kill myself) I needed Prozac. My problems are my own so I get help. I don't wish to take my "mood disorder" out on others (especially those I love). After 20+ years of just "keeping on" while I worked I finally broke.

It wasn't very hard to seek help, all of my fears and self-humiliation came afterwards. One of the worst embarrassments came from riding through the various neighborhoods on a clearly labeled bus. Anyone who happened to see the bus knew who we were. Every time we went out for client pickups,I wanted to sink into my seat

Chris, excellent brief writeup on how stigma comes in the way of our seeking help. I like the tips for their practical use and their simplicity. Brevity of your message is bound to motivate the reader as the task appears just do-able! Thanks.

I think that the perceived notions in our head are likely a product of societal opinions on mental issues, mixed with our own extra fears. If mental illness weren't such a strange thing for people to talk about, more would likely feel open and willing to seek help.
Also, regarding the last paragraph of the post, I think each individual who decides to get help and plunges into recovery has to kind of decide to push away the critics. Once I've figured out myself and what I need, I don't care as much what others have to say. They just don't have the insight into my life and my needs that I do. So it's all gravy. Good post, it's great to read your thoughts.

Excellent article! I am not ashamed of my Borderline Personality Disorder.
Read about it here:
http://makebpdstigmafree.wordpress.com/2013/06/19/i-have-borderline-personality-disorder-…

Simply telling someone you are feeling depressed can trigger behavior derived from stigma. That was my experience. I am glad we are moving to a place where asking for help is no longer a sign of weakness.