On Friday I went to the pharmacy to pick up some medication. It was a long wait, and I wasn’t feeling well. Around me I heard people talking, phones ringing, and the various noises of the grocery store that houses the pharmacy. The sounds seemed to come from a distance, and I felt profoundly disconnected from everyone and everything around me, as if I was an observer in a dream that wasn’t mine. It wasn’t a particularly comfortable experience but it certainly wasn’t an unusual one. I have Dissociative Identity Disorder, and I've lived with chronic, severe dissociation nearly all my life. The episode I described illustrates the combined forces of depersonalization and derealization, two forms of dissociation that often appear together. And despite the fact that I have DID and my dissociative experiences, taken as a whole, are decidedly abnormal, dissociation itself is something just about everyone experiences from time to time. 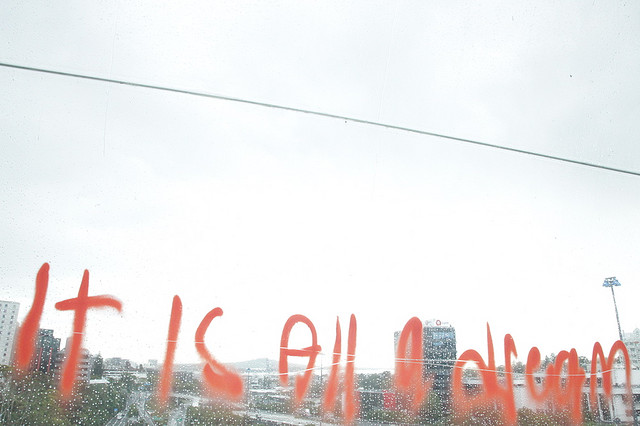 Like most dissociative experiences, derealization generally occurs for most people in periods of high stress, or under the influence of alcohol or drugs.

Such transient episodes of derealization are normal if they occur on rare occasions as a response to trauma or a sudden shock to our sense of self and are not associated with amnesia or flashbacks. Rather than cause distress or dysfunction in our lives, they can help us get through the worst days of our lives in one piece. - The Stranger in the Mirror, Marlene Steinberg and Maxine Schnall

For someone like me, however - someone with Dissociative Identity Disorder - derealization is a frequent interruption that lasts longer, and doesn't need to be precipitated by an inordinate amount of stress or fatigue. It just happens ... a lot.

Derealization is, for me, the most difficult dissociative symptom to normalize. When I talk about mild dissociative amnesia like highway hypnosis, people nod knowingly and I can see that the amnesia I live with as someone with Dissociative Identity Disorder has just become a shade more understandable to them. When I try to describe episodes of derealization, like the one at the pharmacy on Friday, I'm met with vacant looks that tell me I've either a) failed to explain it properly, or b) hit upon something that "normal" people experience, but experience only very rarely (unless they're fond of cannibis, in which case they have no difficulty understanding derealization at all).

I suspect it's a little of both.

Hi. Thank you so much for this. I'm not part of a system, but I experience derealization and depersonalization very frequently. I'm also genderqueer, so this usually doesn't help with dysphoria or figuring out where exactly I am in the non-binary world. :P Thanks again.

hi I'm from Russia I'm sick of derealization 13 years, I have a lot of treated but did not work, in Russia there are no good doctors what to do next I do not know, help me to tell me how to live further

I have DID too and that is exactly how things get for me as well. All the time, even at the pharmacy too!, that happens. Even at this very moment... though more mildly right now. Today in general has been a day like that. Anyway, great post, its nice to know im not the only one.

I went out with my wife and a few friends for her birthday at the weekend. it was a cafe where you ordered and paid at the counter. she came back to me after some time and said ' we couldn't decide what to have' a common problem getting agreement amongst 'the others' -as she calls them. Later the meal arrives and it's a seafood dish. "we don't know who ordered that we're allergic to seafood!'
A check at the counter revealed that the order was correct. We haven't worked out why or which of the others was in charge of ordering, and why the body was to be hurt, if that was the reason, or if one of the others really wanted to try seafood, but it's a simple example of what her life with DID can be like.

Hi David,
That sounds like a very difficult way to live. I can't imagine what life would be like for me if I felt I had to have the agreement of my entire system in order to simply choose what to eat. I hear of people with DID sometimes who operate this way, from a very "we" oriented place. But unless they're just hiding it really, really well, most do not. And I can't help but think that, to some extent, that's a choice. I've yet to meet someone with DID who referred to themselves as "we" all the time *before* their diagnosis. That suggests to me that it's the awareness of DID that motivates people to operate this way. Which further means they don't really have to operate that way at all.
I said all of that to offer the thought that perhaps your wife doesn't have to be so controlled by her diagnosis. Just a thought.