Binge Eating Disorder: What Does A Binge Feel Like?

I had been discussing my binge eating disorder with a friend and they asked me if I could describe what a binge felt like, physically and emotionally. It took me a second to put my thoughts into words. Describing a binge to someone turned out to be a lot more difficult than I thought it would be. If only for the fact that you are describing mental illness and that takes a very discomforting amount of honesty to do. Here are my thoughts on what a binge feels like.

When you have binge eating disorder and binging is something that you do regularly, 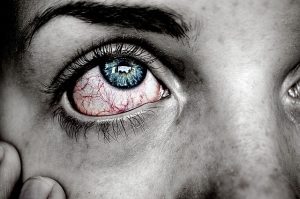 there's no way to sugar coat it, binging can make you feel physically sick. Overfilling your stomach can result in a variety of uncomfortable feelings. I've eaten to the point of feeling nauseous and I've even vomited from binging. I want to make it clear that I did not make myself throw up. I became so ill from what I was eating that my body expelled it.

I also sometimes experienced reflux from binging along with the feeling of being uncomfortably full. There are also stomachaches from the overeating. Occasionally binging has made me feel dizzy or lightheaded. After my gastric sleeve surgery I experienced dumping syndrome (when your sleeve tries to empty too fast and results in severe pain, including nausea and cramps) for the first time and felt as if I was going to die. After a binge you feel miserable. Simply put. You are abusing your body and it's physically awful.

A lot of people with binge eating disorder find themselves eating their emotions and this ends up feeling terrible. Eating does not solve your problems. Many people experience feelings of guilt and shame for not being able to control their eating and these feelings are most potent after a binge.

Most of the time the binge compounds your problems and makes you feel even worse. If you were feeling stressed over a friendship and then you ate your feelings and binged, you now have consumed far more food than you needed and feel physically awful and you still are having a disagreement with your friend. Binging does not work as a coping skill.

Why Would Someone Binge if This is What it Feels Like?

Binge eating disorder is a mental illness and binging is a harmful behavior that feels painful, but the sufferer is compelled to do it, regardless of how it makes them feel. Recently, with life refusing to slow down, the start of grad school looming, a move to be closer to school, a much-needed surgery that I'm financing myself, and my comorbidity with bipolar disorder to contend with, I binged.

I knew it wasn't good for me. I knew it wouldn't help. I knew it didn't make any sense to eat that much. But none of that mattered. I couldn't stop eating. My binge eating disorder was in control and no matter how sick I felt or how much I had stopped enjoying the food I was putting into my body, there was no going back.

For those that don't have binge eating disorder, it can be difficult to understand why someone would do something so illogical that actively makes them feel physically and emotionally distressed. As someone with binge eating disorder, I don't understand it myself. But as hard as you work to control your binges, as many coping skills as you have, as great as your support system might be, there are going to be times when everything falls through and your mental illness is too insistent to ignore any longer.

APA Reference
LaBranche, S. (2015, June 4). Binge Eating Disorder: What Does A Binge Feel Like?, HealthyPlace. Retrieved on 2022, December 2 from https://www.healthyplace.com/blogs/bingeeatingrecovery/2015/06/binge-eating-disorder-what-does-a-binge-feel-like

A Starvation Diet&#039;s Toxic Thoughts
Eating in a Restaurant When You Have Binge Eating Disorder
Vicki
June, 14 2015 at 4:08 pm

I just recently, in the last week, admitted I had an eating problem. I also have Bipolar Disorder. I opened up to my husband first who was very supportive. Next was my Psychiatrist who diagnosed me with Binge Eating Disorder. Next I opened up to my therapist. Our first Discovery was that I'd been doing this since I was a child. I'm 53 now. I started as a way to make myself unattractive to my sexual abuser. Later I used it as a coping mechanism for other forms of abuse, failed Relationships, Stress, and mood changes. Eventually it got out of control but I kept my secret hidden. Since my revelation, I am free, a great burden has lifted. I've joined a support group and am getting Professional help. Thank you for your post.

Wow binge is a very bad thing. I have a relative who eats and eats until her weight has gone overboard. She started experiencing back ache problems and the Doctor keeps on telling her to lower her weight but it is impossible. What really should be done? Now she can't do any manual work because she can't bend... At least for me am particular in the way I eat.

I've had a binge eating disorder most of my life. It started with a way to cope with my bad family life. Then it became a coping mechanism for every problem I faced. Six years ago my husband killed himself and my bingeing went out of control along with developing major depression. I almost put myself in the hospital. I ended up seeing a Psychiatrist and through trial and error we found 3 different medications that have greatly helped me. I still binge once in awhile, but I feel way more in control and can usually stop mid-binge.
When I was experiencing my worst bingeing episodes it felt like I was high on a drug. I would plan my binge throughout the day. I would make a list of the foods I would buy. I would get more excited as the binge came closer. By the time the binge actually started I would feel euphoric. I would eat and eat. I would start to feel uncomfortable, but would ignore it. I would eat some more until I felt like I couldn't take any more. That I would burst if I ate one more thing. That is when the self-hate would start. I would feel disgusted with myself. I would freak out and throw away all of the remaining foods while telling myself I would never do it again. Of course, I never kept the promise for long.

I agree with the feeling that you can't control the binge eating - it's as if once you start something takes over and it's almost impossible to stop. I know that I eat to numb my feelings, and only when I have a stomach ache do I stop. Sometimes I have a stomach ache and I continue eating on top of that and end up being sick, and it's always a relief that the pain goes straight after that. But it has successfully distracted me from whatever I was feeling in the first place. What I am learning to do is understand why I feel the need to eat, especially sugary foods - it's usually because I'm exhausted so then I can look at why I'm exhausted, e.g. Have I got upset about something I can't control at work, reacted to a situation, all of which drains my energy. I'm slowly learning to appreciate my body and am treating it more tenderly so there is less binge eating, but it still catches me every now and then. So I'm working on allowing myself to feel . . . and using the Gentle Breath Meditation is a lovely thing to do in order for me to re-connect with my innermost being.

"I knew it wasn’t good for me. I knew it wouldn’t help. I knew it didn’t make any sense to eat that much. But none of that mattered. I couldn’t stop eating" - exactly. It's so frustrating when someone asks "well if you're not hungry don't eat it."
I tried so many things, and what helped was actually learning about anxiety and coping mechanisms. That's what worked for me. And time, time to have experiences that demonstrate that I can cope in other ways. I've also started meditating, and it just occurred to me that I've never thought about a binge in the present tense.

Thanks for your comment! It sounds like you've developed some great coping skills. Meditation is an excellent way to help deal with overwhelming emotions and the urge to binge.

thank you for making this article. it is very helpful and very relevant to us readers