Bob feels satisfied with his sex life, but lately, his girlfriend has been voicing disappointment with how long he can perform. He wishes he could last longer but, the harder he tries the more quickly he reaches orgasm. She says her other boyfriends have all lasted longer. Bob too wonders if he has a real problem.

The image of the guy who can "keep it up" for hours no matter what, fills books and movie screens. Although men may not consciously tell themselves "Stallone would never come too quickly, why do I?"--such macho messages and comparisons are surely implied. Staying Power is a crucial factor, not only in male sexual satisfaction but in how satisfied women are with sex. The study of premature ejaculation yields some important information regarding the ability to delay orgasm. In several surveys, in Europe and the United States, up to 40% of men stated that they had a problem with premature ejaculation and were not happy about it.

But when is the problem severe enough to be given this label? How many minutes or hours a guy can keep it up is not the issue. What is more important is how well a man can control his arousal and his physical response to it. Men who have little or no control are said to have a problem with premature ejaculation. However, many men who do not have the disorder may want more control and to last longer. This desire for Staying Power can be helped by what we have learned from the more severe problems of premature ejaculators.

There are a lot of things which affect Staying Power. Sexual inexperience is a common cause. Young guys tend to come quickly, but they improve as they gain more experience and are better able to monitor signs of an impending orgasm. Another common problem is when the woman wants to go on for longer, but the man wants a quickie. The woman is not too thrilled and, if the couple communicates poorly, neither may be aware of the mismatch in their wants.

Anxiety and other emotions arising from problems in one's relationship are other sources of problems with Staying Power. Take Frank and Jane. If they have a fight and are not speaking to each other, it is unlikely that they will feel open enough to have intercourse or, for that matter, interested even in getting each other off.

What most men do to try to increase their Staying Power is to think about something else. They make a mental list of the 10 highest batting averages of all time, count backward from 100, recite the Pledge of Allegiance--anything to put distance between themselves and their fear of coming too quickly. They may try condoms, local anesthetics or other ways of dulling their physical sensations.

What is surprising to most men is that these attempts at distraction--mental or physical--can make them come even more quickly. Not what they bargained for! In addition to focusing away from enjoying sex, the man is distanced from his sexual sensations and responses. A key aspect of Staying Power is the ability to keep in contact with your sensations and when orgasm is about to happen. Men who have problems with premature ejaculation don't know when they are about to ejaculate and thus cannot control it. By making the man more out of contact with his body, these attempts to distract and dull sensations make the problem even worse.

An approach that works better is to be physically, mentally, as well as emotionally, involved with the act of making love. Here are some simple methods to help you along. One is to use positions that provide less intense friction to the penis--like having the woman on top. Thrusting more slowly also helps to delay orgasm.

Sex therapists working with men with serious problems controlling ejaculation use a series of exercises called Sensate Focus. These shared progressive touch activities help both partners become increasingly familiar with their own and each others' bodies by concentrating on their physical sensations and reactions. First they focus on sensations of being rubbed and caressed in different areas, excluding the genitals, and work gradually up to being genitally stimulated.

The Stop-Start technique is often used when the couple begin genital stimulation and move to intercourse. During stimulation/intercourse the man thrusts a few times and then stops if he senses he's about to come. This is repeated until he eventually feels in greater control.

One thing that clinicians actively discourage is apologies. Men who are worried about not lasting long enough are often anxious and apologetic during and just after orgasm. This makes their partners more tense and further interferes with their ability to be physically, mentally and emotionally in the lovemaking encounter.

What makes sex good in general also makes for good Staying Power. Good sex is based on good communication between partners. It is also based on working out issues in the relationship so that emotional pressures do not distract from sex.

So, for better Staying Power, don't distract yourself by counting backward from 1000, don't use a desensitizing cream or feel guilty about having an orgasm. Be more fully emotionally and physically available to your partner, master your responses and ENJOY a deeper sense of sexual intimacy.

Terry Riley, Ph.D. , is on the staff of the San Jose Marital & Sexuality Centre where he works on a variety of male sexuality issues and is in private practice in Fremont, CA. 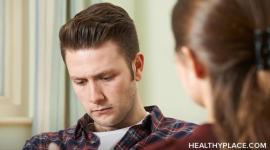 Why Diagnosing Sexual Problems in Women Is So Difficult

Herpes on the Rise

Coping With An HIV Diagnosis

Do Women Really 'Peak Sexually' at 30?

Comprehensive information on the types, symptoms, causes and treatments of dissociative disorders, including Dissociative Identity Disorder (DID).

Welcome to the Dissociative Disorders Community at…
What Is Abuse? Abuse Definition