Eating Disorder Recovery: One Bite At A Time

On December 28, 2010, I started the process of recovering from anorexia nervosa. Many people ask how I was able to get started when I was going through a multitudes of stressors.

It really was very simple at its core—I woke up that morning, made my breakfast, and proceed to eat one bite at a time. It has been that way ever since. 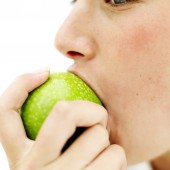 I am not trying to be sarcastic or dismissive when I write that my recovery process started with one bite. But that is how it is. At some point, I had to get up, face the food and then eat it.

It was the hardest thing I ever had to do.

It wasn't like I didn't eat anything. But I was eating very little and my body was protesting against such treatment, as I would often have dizzy spells and have blackouts. My blood tests were showing signs of kidney trouble. It was becoming increasingly difficult to focus on my graduates studies and it took all my will power and determination to make it through the semester.

And I would choose not to eat or to eat very little. I was counting every calorie, right down to the spoonfuls of powder cream for my coffee. I also was weighing myself every morning, and how my day went was very much dependent upon that number.

Then, of course, it was impacting my relationship with my husband, friends, and loved ones. Finally, two of my professors noticed my downslide and rapid weight loss and expressed their concern.

I had experienced the beginning stages of recovery in 2009 after taking about three months sick leave from home. I knew what it was like. I had to constantly eat in order to gain weight, but I did and I was fairly healthy for the second half of 2009.

The rest of 2010 was spent trying to recover, only to pull back and restrict again. Back and forth. I was on a roller coaster that I couldn't seem to grab control of.

December 28, 2010—The day I decided to eat one bite at a time. I ate breakfast. Check that off my list. I drank an Ensure Plus. Another milestone reached. I ate lunch, a real lunch with bread and meat and cheese. More bites taken and more nutrition inside me. I grabbed a frozen dinner, stuck it in the microwave, and ate dinner.

When I am stressed or depressed or overwhelmed, I find that I am not hungry and sometimes try to tell myself that missing one meal—really, just a few bites—would be okay. Then I tell myself that isn't true, but instead it is the eating disorder voice talking. Then I go and make something and eat it—one bite at a time.

I find this works for me. At first, I constantly thought about how much food I had to eat to gain the weight I needed to gain. I felt overwhelmed by it all, and that was typically when I would get stuck in the past and recovery would fall apart piece by piece.

Then someone posted on my Facebook wall to take things "one day at a time." I used to hate that saying, because I thought it was at best an overused cliche and worst something someone said when he or she doesn't know what else to say. But I thought about it and realized sometimes even one day at time was too much, sometimes it came down to one minute at a time.

I find more and more I am okay with eating and food. But although I eat regular meals and reached my healthy goal weight months ago, I still do not consider myself completely recovered. I still sometimes have to rein in my fears about food and weight and just eat one bite at a time, erasing the fears from my mind. Then comes the next bite and the next bite...and soon I have completed a meal.

I still remember that first bite in December, the crunchy granola mixed with vanilla yogurt. That was the start of recovery, and it continues every day of my life because I promised myself then that I would never go back to anorexia.

APA Reference
Gambrel, A. (2011, May 13). Eating Disorder Recovery: One Bite At A Time, HealthyPlace. Retrieved on 2022, August 14 from https://www.healthyplace.com/blogs/survivinged/2011/05/eating-disorder-recovery-one-bite-at-a-time

Anorexia Stole My Life: Reclaiming Myself in Recovery
Surviving ED Merit Award Dedicated To Everyone Fighting ED
Ringlets
May, 20 2011 at 9:54 am

Hi Angela,
I just wanted to thank you for writing this blog. I have been feeling just like you have lately. I have reached my goal weight, and I am ok with that. I just have my fear about eating three meals a day. One part of me realizes you have to eat, but the other half of mind is so afraid to gain anymore weight. What would you do?
Thank you,
Ringlets