Ways to Self-Soothe During an Emotional Crisis

Sometimes an emotional crisis can't be avoided. When an emotional crisis happens, it is important to know how to calm down. There are many ways to self-soothe, but for now I'll focus on three: petting an animal, burning incense, and drinking herbal tea. 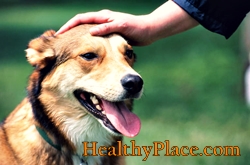 ospital, there was a therapy dog on staff: Amber, a pit bull mix. When she came in, the whole room would light up. Amber noticeably affected people in a positive way.

That's not just my observation. According to the University of Pittsburgh School of Medicine, therapy dogs have been shown to increase endorphins--a feel-good hormone--in humans.

"People take drugs like heroin and cocaine to raise serotonin and dopamine, but the healthy way to do it is to pet your dog, or hug your spouse, watch sunsets, or get around something beautiful in nature," Dr. Blair Justice of the University of Texas said on WebMD.

I'm sure it works with any animal--I used to have pet rats that were helpful. So don't worry if your pet is a little off-beat: as we said in the Army, "If it's stupid but it works, it's not stupid."

According to Hebrew University of Jerusalem, burning incense, especially frankincense, has mental health benefits. Specifically, it reduces anxiety and has an antidepressant effect, and also serves as a sedative. I keep incense on hand for precisely this reason.

The Khacho Ghakyil Ling Nunnery in Kathmandu, Nepal, makes Tibetan style incense which claims to have mental health benefits. "This high quality incense contains special herbs and sandalwood that calm the mind," reads the label of the Tibetan Meditation Incense. "It prevents depression and anxiety and promotes good sleep, mental quietude and peace of mind."

I'm fortunate to know a woman who has forgotten more about herbal medicine than I will ever know. She runs a shop called TeaPots n Treasures in downtown Indianapolis. The shop's unofficial slogan is "We have a tea for that", and they do. She has several different teas for anxiety and depression, some of which are perfectly safe to use in conjunction with psychiatric medication. She introduced me to yerba mate, which is used in South America as a natural antidepressant, mood stabilizer and stress reliever.

According to the book 20,000 Secrets of Tea, other herbs that are good for anxiety are hops, kava kava, lemon balm, linden blossoms, rosemary, St. John's Wort, and verbain. I've had luck with valerian root. You have to find what works for you, but be sure to check with your doctor first.

The tea itself may have benefits, but the process of drinking it also helps when you drink it mindfully. Feel the heat of the cup on your hands. Smell the fragrance of the tea. Taste the blend.

What ways do you self-soothe during an emotional crisis?

APA Reference
Oberg, B. (2013, February 26). Ways to Self-Soothe During an Emotional Crisis, HealthyPlace. Retrieved on 2022, December 9 from https://www.healthyplace.com/blogs/borderline/2013/02/ways-to-self-soothe-during-an-emotional-crisis

Things I Wish People Knew About Mental Illness
A Story of Overpermissiveness
Annette
September, 16 2021 at 4:50 pm

I love to get fresh flowers, burn scented candles, and love on my little chihuahua. I put on some soft music and tend to my house plants. This really soothes me and helps me to focus.

[…] people who Google this are in emotional crisis but not really suicidal. They simply want to make a cry for help. They want to be taken seriously, […]

thanks for great commentes. Before I will laugh though I must listen to the blues.
Always helps

Laughter is the best medicine. Keeps things in perspective. Funny movies, comedians, even many 'serious' situations often have a silly side. Think of funny memories/events. Children naturally have a lightness which is refreshing. Tip: what your friend thinks is hilarious may be annoying/stressful for you, so tune in to what really makes YOU lol.

I have my cutie birdy..as long as she is in a good mood, she is my number one to go pet for comfort..excellent during emotional crisis.

I to have several pets--3yorkies,1 yellow lab, and an ancient hemilayan cat,name Gert. I find that I have buried myself with as my only. I have isolated myself from the world. I am not sure how to get back to living life. Twelve years of verbal and emotional abuse has left me very much dented. I live in a very small town. I live where I have nothing for 70 miles around. How do you go about healing without any resources--no funds to pay for the help,no therapists, no one to talk to or about the damage that done. Where can I reach to have someone who can understand how deep the cuts are , and NOT tell me to go to church, "It's almost impossible for me at times to simply function. I'M tired of being broken.

[...] as a natural antidepressant, mood stabilizer and stress reliever.Read the entire article here: Ways to Self-Soothe During an Emotional Crisis Tweet Pin It Posted in: Therapy News Leave a Comment (0) → Leave a CommentClick here to [...]

Thank for your sharing,
i usually smoke, meditate,listening to soothing music, watching movies, get a massage or try swimming to self soothe myself. I will try your tips. I might have a bit difficulty on finding the herbal teas in my country though. I am thankful that im not one of those people who drinks alcohol to soothe themselves. I still smoke ( i know it's bad) but, i try to cut my tobacco intake little by little. Have a nice day.
Love, Dian

I just wanted to add to your post. I can tell when I am in bad shape when my pets do not comfort me, they irritate me. My cat especially. I don't want her around me. The purring gets under my skin. I have to figure out why I am so irritable for her to be a comfort.
My dog is different. He can do nothing to irritate me. He is a German Shepherd and trained to help with some things. He doesn't come in my room though. The cat practically lives with me in my room.

Hi im kelli.ive noticed my cats do the same thing as well.when there is a lot of fighting, arguing and yelling.my boy cat is 5 and he has anxiety and licks themselves so much and the other one does to.i think they get upset when we get upset