Combined or Mixed Drug Intoxication: What Is It?

Combined Drug Intoxication in the News

Combined drug intoxication is not new, but a string of celebrity deaths from poly drug use 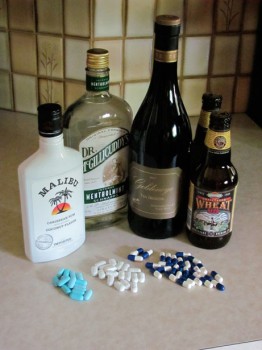 (using multiple drugs at the same time) over the past decade has drawn attention to its dangers. I first became aware of the mixed drug intoxication phenomenon with the death of Anna Nicole Smith in 2007. The model, bombshell and tragicomic American media personality died just 11 days before I got sober. Because it was an emotionally charged time for me, and because her death, and indeed life, seemed so bizarre, Smith's untimely passing affected me.

As always happens when a celebrity dies, the news media followed the story closely, reporting on both fact and speculation on the case. Ultimately, medical examiners determined that Smith died from combined drug intoxication, naming chloral hydrate, a sleep aid, as a primary offender. The sleeping aid became increasingly toxic when combined with other drugs found in her system, most notably benzodiazepines (anti-anxiety medications). It is impossible to say exactly which does of which drug delivered the fatal blow. The previous year, Anna Nicole Smith's son Daniel died after mixing antidepressant medication and methadone.

Unfortunately, the high profile fatalities from mixed drug intoxication did not end there. Heath Ledger, Brittany Murphy, Cory Monteith, Whitney Houston and Phillip Seymour Hoffman all lost their lives to the effects of combining various drugs (including alcohol).

Alcohol use increases the risk for combined drug intoxication. Alcohol is a psychoactive drug, meaning it is a chemical substance that alters one's mood and perceptions. When mixed with other drugs, its effects (and that of the other drugs) may be increased. This does not mean that mixing drugs will result in a higher high or increased feeling of pleasure or relief. Rather, mixing drugs can be fatal without a person even realizing they are very intoxicated.

One of the times I landed in the emergency room from alcohol poisoning, I had also taken several benzodiazepine pills. They were prescribed to me, and, of course, I had been told not to drink while taking them, but, of course, I was going to anyway. The doctor told me that I had taken an extremely dangerous combination, and that having perhaps even one more pill in my system could have killed me. There was nothing illegal here, just prescribed medication and alcohol (though I was taking more than the prescribed amount of medication).

The strange thing was, I did not feel dangerously close to having my heart or lungs stop. I had actually felt much sicker from other experiences. But that is precisely why combined drug intoxication is so dangerous: it is possible to consume a lethal combination without even realizing you are doing anything dangerous. Older adults, or those requiring a lot of medications, are at increased risk for mixed drug intoxication. The drugs involved need not be illicit in order to be dangerous. This is why it is vital that you discuss all drug use with your healthcare provider and take seriously the warnings that come with medications.

APA Reference
Lesley, K. (2015, July 20). Combined or Mixed Drug Intoxication: What Is It?, HealthyPlace. Retrieved on 2022, December 7 from https://www.healthyplace.com/blogs/debunkingaddiction/2015/07/combined-or-mixed-drug-intoxication-what-is-it

Experiencing and Overcoming Loneliness with Addictions
The Challenges Behind Loving an Alcoholic Personality
Christopher Nowak
April, 26 2017 at 7:32 pm

Almost 14 months after using Aleve, Voltaren Extra Strength and Kalaya for tennis elbow from a janitorial position, I am still alive BUT that my time on earth is limited. I shall soon die from H. Pylori/stomach cancer

Tom,
I too lost my son from CDI in 2013. He was a nurse on various meds as per the VA. ME said all meds were w/in normal limits. Mix of combined w/a couple of Beer led to him not waking. My heart is broken. Sending you hugs and prayers.

Hi Mary,
I am so sorry for your loss. We absolutely must do better by our veterans. What happened to your son should NEVER happen. I'm so sorry.

I used to be recommended this blog by way of my cousin. I'm not certain whether this submit is
written by means of him as no one else understand such specified approximately my difficulty.
You're wonderful! Thanks!

I like the valuable information you supply on your articles.
I'll bookmark your weblog and take a look at again here frequently.
I'm moderately sure I will be told a lot of new stuff right here!
Good luck for the following!

James, thank you very much for your comments. I am so sorry for your sister. Thank you for using your personal loss as an opportunity to try to educate and help others. I agree with you, we just do not know enough about all drug interactions to say definitively what is safe and unsafe. My heart goes out to you, her children and husband.

My sister died September 30, 2015. (She was 32) and had a 3 year old daughter who turned 4 the day after we buried her. She also had a 7 year old son and a husband. She too died of multiple drug toxicity (Accident) and was on a concoction of medications that eventually became toxic and killed her one night. All of these were prescribed and she had no clue how dangerous these were or that they were slowly killing her. If you are on multiple medications please consider going off as many as possible. A medication should help you, NOT kill you. The fact is, we are NOT as smart or as advanced as we think we are and medicine is flawed and still has a LONG way to go. In general, they do not know know the combined effects of multiple drugs together. They may know drug A and B are lethal together but they do not know the combined effects of A, B, and C. Or A, B and D. Please use EXTREME cautions and if you MUST be on multiple drugs at once, any slight change, any weakness, dizziness, trouble breathing, palpitations, etc...see a doctor immediately. Don't assume you are ok and everything will be fine. <3

thank you for this excellent article. like many others, my 38 year old daughter died of MDI - 4 substances, including heroin, cocaine, xanax, and alcohol, most taken at an all night party. none of the drugs alone (in the quantities she used) was lethal. she died in her room within reach of her phone and shouting distance to housemates. she was clearly overwhelmed by the effects of the drugs and could not move or speak to help herself. for months, i thought: she shouldn't have died because she didn't actually overdose. now i understand much better what happened to her system. i did write an essay about her and her death and i include this link with the hope you may be able to publish it on your website. thank you again for your efforts to educate. Link: http://www.vnews.com/home/18955201-95/not-one-more-after-her-daughters-death-a-mother-gri… (url for article: Not One More)

Linda, I am so sorry for your loss. I will forward your information to my supervisor as I do not know the process for publishing anything other than this blog. Thank you for doing your part, I do want to educate people about the dangers of this phenomenon.

Tom, my mom died of acute mixed drug intoxication as well. Listed as an accident on her death certificate as well. The funeral home called to tell me nearly 5 months after she died. When I asked them what that meant they said she over dosed. It took every last ounce in me to call the medical examiners office to see if anything that she took would be such high levels to be considered a susicide. They assured me Mixed drug intoxication is NOT the same as an over dose. It is the combination of pills that interacted badly with each other (unless other unperscribed toxins were found in the system). Unless there is soemthing I missed from your post... Mixed drug intoxication is not an overdose.

Christi, I'm very sorry to hear about your mother. This should never happen. When I was doing research for this article, I read that the risk increases for people over a certain age simply because they take more medications and those medications can have potentially lethal interactions. I don't know if this is what happened to your mom, but I really feel we need to do a better job of monitoring and educating people. And you are correct, acute mixed drug intoxication is not the same thing as overdose. My thoughts are with you, and Tom, and Linda, and everyone else affected by this.

Kira, thank you for your kind words. I struggle with the idea that my son died from overdose or CDI. I don't really tell anyone how he died. The word overdose seems to diminish all of his efforts. His death certificate says accident and acute drug toxicity. They gave a list of drugs and their levels various . I don't know what to do with this.

Again, I'm so sorry Tom. It sounds as though he was trying. It's unfortunate that understanding of CDI is not more widespread so that people would not what to be careful of. It is certainly a very confusing and difficult situation you are in. My heart goes out to you and your family.

Hi Kira,
Yes exactly. They also don't test for all of the drugs and will assume it is just a single drug like 'heroin' or 'meth' and nothing more because benzodiazepines or a new synthetic drug undetectable but just as dangerous played a role.
So many are unaware. We need to spread awareness.

I think combined and mixed intoxication is such a huge misnomer in drug addicted communities. It is so harmful and dangerous yet people are unaware.
I actively encourage people with resources, use
addiction recovery quotes, and try to help any friends or family in need.
Thanks again for your article on the topic.

Hi James, thank you for your comment. Just curious, when you say it's a "misnomer," do you mean because it is often listed as overdoes?

Good article! Especially the warning that you may not even feel the effects of the drug/alcohol combination when it's very dangerous. Thanks for sharing your experience.

Thank you for your comment Kathy. I just want more people to be aware.

My son died in March from combined drug intoxication. Or they called it acute multiple drug toxicity. Listed as an accident. He had been sober nine months. He was 31. He had four herniated disc in back. Obviously he was seeking relief. He died in my home two rooms away from me. Wish I could of done something.
I feel only sadness.

Tom, I am so sorry for your loss. This is a tragedy. My heart and thoughts go out to you and your family.