But, say experts and formerly married gay men, pressures to live straight still override sexual orientation. Churches, the corporate world and family relationships continue to push gay men and lesbians into the closet, with a straight spouse as the perfect cover.

"There's an inordinate pressure for people to fit a certain mold," said Mark Shields, spokesman for the Human Rights Campaign in Washington, D.C., the country's largest gay and lesbian organization. Gays "stand against so many things you've been taught implicitly and explicitly from the moment you were born in this culture."

The number of gays or lesbians married to straight spouses is difficult to determine. Currently there are 6,000 to 7,000 active members of the national Straight Spouse Network, said Executive Director Amity Pierce Buxton in El Cerrito.

Buxton has been researching gay/straight marriages and speaking with some 9,000 spouses since the mid-1980s, when her husband came out as gay.

"He led a perfectly straight life, and it nearly killed him," said Buxton, who has two children with him. "He became physically depressed and withdrawn."

Many face similar lifelong struggles in these marriages, which are often based on true affection and respect. Information networks now exist for gay married men, married lesbians, straight partners and their children -- who each face different, painful issues.

"There is still a huge, negative wedge that says being gay or lesbian is sinful," said Bob, a 71-year-old formerly married gay man who asked that his last name not be used. He organized a chapter of the GAMMA (Gay Married Men Association) support group in Grand Rapids, Mich., where about 14 members of the national organization meet twice monthly.

In speaking with hundreds of gay married men through the years, Bob said, he most often hears of two pressures: church and family.

"Their families say, 'When are you going to marry and give me grandchildren?' And their churches look down on being gay" -- some even ask gays to renounce their sexuality or leave the congregation, Bob said.

Others are in professions that don't allow them to be themselves.

"I have clients who are teachers in Catholic schools and physicians very worried about being pegged as gay," said Joanne Fleisher, a licensed clinical social worker in Philadelphia who counsels married women attracted to other women. She's author of the upcoming book "Living Two Lives: A Married Woman's Guide to Coming Out."

The gay rights movement, especially active in recent years, isn't much inspiration to these men and women.

Tom Fronczak, a Providence, R.I., psychotherapist who has counseled gay married men for 17 years, said they generally don't identify with the increased visibility and acceptance of gays.

"They'll say, 'That's not me,' with all the (gay) pride celebrations" and other public pictures of gays, Fronczak said.

He runs the Gay Fathers of Rhode Island support group. During twice- monthly gatherings, men discuss the pull between marriage and fatherhood, and their identity as a gay or bisexual. "They're very conflicted about who they are, versus who they need to be for others," Fronczak said.

He added that he has never met a gay married man who has not been depressed or considered suicide: "These guys are so isolated. ... They feel there is no way out. They feel they are trapped between two worlds."

That's because despite more openness about being gay, it continues to be difficult.

"It is important to remember that only 14 states prohibit discrimination based on sexual orientation," said Karen Krahulik, director of the Center for Lesbian, Gay, Bisexual and Transgender Life at Duke University. "So far this year, 99 marriage-related bills have been introduced in 37 states, 91 of them to restrict gay marriage."

Some who work with married gays are cautiously optimistic that the younger generation of gays won't have to marry into the straight world.

"Hopefully it's dying out with old duffers like me," said Bob of Grand Rapids.

Shields, with the Human Rights Campaign, added, "One of the best ways gay people can help that is by living their lives out and open and honestly, so gay kids growing up today can see those happy role models. That is how change happens."

back to:   Gender Community Homepage ~ Depression and Gender ToC

The Fallout: When a Spouse Comes Out
Facing Middle Age and AIDS 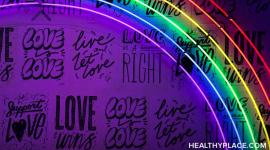