Suicide is a tough topic to talk about. That's why many people don't talk about it.

One of the myths about suicide is: if you ask someone about their suicidal intentions, you will only encourage them to kill themselves. Actually, the opposite is true. Asking someone directly about their suicidal intentions will often lower their anxiety level and act as a deterrent to suicidal behavior by encouraging the ventilation of pent-up emotions through a frank discussion of his problems.

There are 2 types of suicide stories on this site:

next: A Suicide Note From Bruce David Ciniello
~ all gay is ok! articles
~ all articles on gender

Gay Is OK! Sitemap
About Joey
Why Did Robbie Kirkland Have To Die? 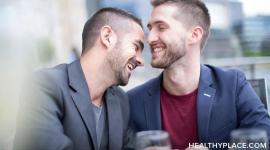 Depression and Mental Health Emerge as Major Concerns for the Community

Coming Out - For Gay Teenagers